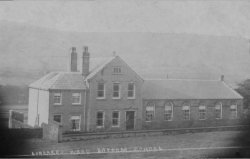 In 1832, a group of non-conformists set up a Sunday School, in a barn near the Rose & Crown, on the moors above Slaithwaite. In 1834, they moved into a room in the Rose & Crown, then, a few years later, into a nearby house.

In the 1850s another move was necessary, to Bank Nook, owned by Joseph Shaw. Much of the land in Slaithwaite was owned by the Earl of Dartmouth, who would not have non-conformist chapels or schools in the village, and when Joseph Shaw died, Dartmouth bought the property and closed the school.

The school searched for premises in Marsden, where Dartmouth could not influence matters, and in 1862 a Sunday School was built at Lingards Wood Bottom, just inside the Marsden boundary, officially opening on 10 September 1863.

The school was famous for its athletic teams, and its climbing team was so successful it was banned from competitions!