In the early 19th Century, the few mills in Marsden included cotton mills, silk mills and woollen mills. At Clough Lea, there was a cotton mill called Fell Mill or Woodhead Mill, which subsequently burned down (some said it was deliberate). Further downstream was another cotton mill, Heywood Mill, which was re-built in 1841 as Middle Mill, a woollen mill.

In 1710 a mill for scouring and fulling cloth was built by the river at Hey Green by Robert France, and the weavers of the area agreed to send their cloth to it. Later, it was replaced with a larger mill for cloth manufacture, and later still it became a flour mill. All that now remains is the mill dam and pond, and the stables, now Lower Hey Green cottages.

In 1867, John Crowther established Bank Bottom Mills. Over the years, Crowther and Sons opened many mills in Marsden and the Colne Valley. In 1936, Bank Bottom covered 14 acres, used 680 looms and 43 carding machines, and employed 1900 people. It closed down in 2003. It was built in 1801, and eventually replaced Top Bank Mill, which was demolished in 1891.

This was owned by Samuel Firth of Gatehead, Marsden, and opened in 1888. He also owned Holme Mill.

Owned by Samuel Firth of Gatehead, who was a patron of music and education in the area, and contributed to the Huddersfield Choral Society. He died in 1929. He owned the mill jointly with his brother, Cooper Firth (born 1867). They traded under the name S&C Firth Ltd. It was later run by Herbert Arnold Firth and William Schofield Firth (children of Cooper) until the late 1950s. 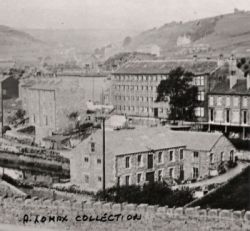 In the 1851 census for Marsden there is one silk manufacturer employing 40 hands, a Benjamin Lockwood who lived at Rose Hill, which is at the bottom of Chain Road near Gatehead, Marsden. His son Henry, aged 16, was probably learning the business and was a silk spinner. Apart from this, 31 of the employees in Marsden can be traced, ie. 1 silk carder, 10 silk dressers, 1 silk layer, 1 silk minder, 1 silk piecener, 2 silk piecers and 1 piecer (silk), 2 silk reelers, 4 other silk spinners +1 spinner (silk) 3 silk twiners, 1 silk twister, 1 silk warper, 1 frame tenter (silk).

By the 1861 census no silk workers are shown.

On the 1854 1st edition O.S. map 'Upperend Mill' is shown as a Silk and Woollen Mill. This shows an L-shaped building to the north of a bend in the River Colne. Between the Colne and the river is a mill pond. The 1801 map only showed a drawing of the northern wing of the mill, marked 'The Factory', owned by John Haigh, who apparently owned a lot of cotton mills. A 1900 photograph shows again just the northern wing (recognisable as that in the 1801 map), indeed on Warehouse Hill, plus what seems to be a portion of the side-wing to the east of the reservoir.

On the north bank of the Colne at Clough Lea, this was a relatively small, water-powered mill. It was built in 1841.

This mill was on Brougham Road, and was part of the firm of J E Crowther and Sons. It was also known as the Colne Valley Spinning Co. In 1936, it had 260 looms and 32 carding machines.

Ottiwell's Mill was at the bottom of Binn Road, and was to play a part in the story of the Luddites. No trace of this mill remains.

Its owner, William Horsfall, was murdered by luddites on Crosland Moor. Horsfall's father, broken by the death of his son, re-introduced hand-cropping frames, but sold the mill a few years later.

This was Taylor's Iron Foundry, and was taken over by Crowther's, and turned into a shoddy mill. It no longer exists, but was opposite the present Old New Inn. Crowthers built some new houses on the site.

Built in Clough Lea in 1860 by Robinson Bros. It was known as Clough Lee Mills. It was sold in 1903, and eventually the mills were taken over by a Belgian firm, Bailly-Ancion, in 1934. It was then used for wool scouring, dyeing and bleaching, employing 200 people. It was demolished in 2001, and a new housing estate was built on the site, although the original chimney was left standing.

On 26 October 1941, there was a large fire at the mill. It was rebuilt after the fire, which had cost £50,000. In 1946, the MD, J D Bailley was appointed Belgian consul for the West Riding of Yorkshire, so Marsden was home of the Belgian Consulate!

In 1949 they set up a bus service to bring in workers from Oldham. Despite its success, trade declined in the 1980's, until it was closed in the 1990's and eventually demolished for new housing.

This no longer exists - there is no trace. It was situated where the present banking for the Butterley Reservoir is. It was demolished in 1891.

This was one of the mills protected by troops during the luddite troubles of 1812-3.

This was a silk mill, operating in the 18th Century. It was owned by the Haigh family. In a period of labour shortage, they brought foundling children from London to work in the mill, lodging them at Throstle's Nest. The mill was demolished in the 1930's.

This can still be seen, just off Manchester Road, now operating as a garage. It was powered by water, and the wheel was made by Enoch Taylor's foundry.

At the time of the Luddite riots, the mill was owned by John Hirst of Slaithwaite. He heavily defended the mill, by barricading the windows and doors, and arranging that the ground floor could be sealed off from above. Defenders could fire on rioters from the upper windows. The mill chimney was built 80 years after the mill itself.