There must be many Marsden inhabitants and visitors who wonder how a row of houses on Manchester Road came to be called Warrington Terrace.

The story of how this happened goes back to a self-made man named James Walker who was born at Cop Hill, Slaithwaite in 1832 and lived in Marsden between the ages of 18 and 21 when he worked as a clerk at in the Goods Office at Slaithwaite Station.

At 21, James moved to Warrington to work in the North Western Railway Company’s stores and then to the Chandos Iron Foundry. During his time in the railway stores he often spent his lunch times talking to plate layers about their work and possible technical improvements to the railway. James possessed a keen business brain and saw the potential in an idea suggested by one of the men. This was a device which came to be known as a ‘permanent way chair’, an improved method of fixing rails. James had prototypes made, succeeded in persuading a railway company to adopt the chair and his fortune was made.

After a successful business career, James died a wealthy man in 1896 but failed to leave a will or make any provision for his illegitimate daughter by his housekeeper. His fortune of over £80,000 was divided among his legitimate relatives, the money becoming known locally as 't’Warrington brass'.

Two of his beneficiaries were Joseph Woodhead, an overseer in the Finishing Department of Robinson Woollen Mills and his sister, Hannah Wood.  In the 1891 census Joseph Woodhead is shown as living with his wife and four children at Clough Lee in Marsden. 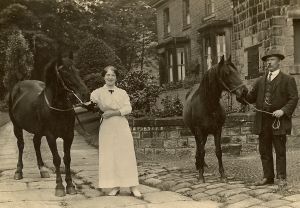 This photograph shows Joseph Woodhead and his daughter Edith at Bankside some time in the 1920s.

Ten years later, and thanks to his inheritance, Joseph had built three properties at Bankside and was living in one of them with his family.

Joseph’ s other property investment was to build a terrace on Manchester Road which he named Warrington Terrace in honour of the source of his new-found wealth. His sister, Hannah, made a similar investment in another row of houses on the opposite side of the road, now known as Glen Royd.